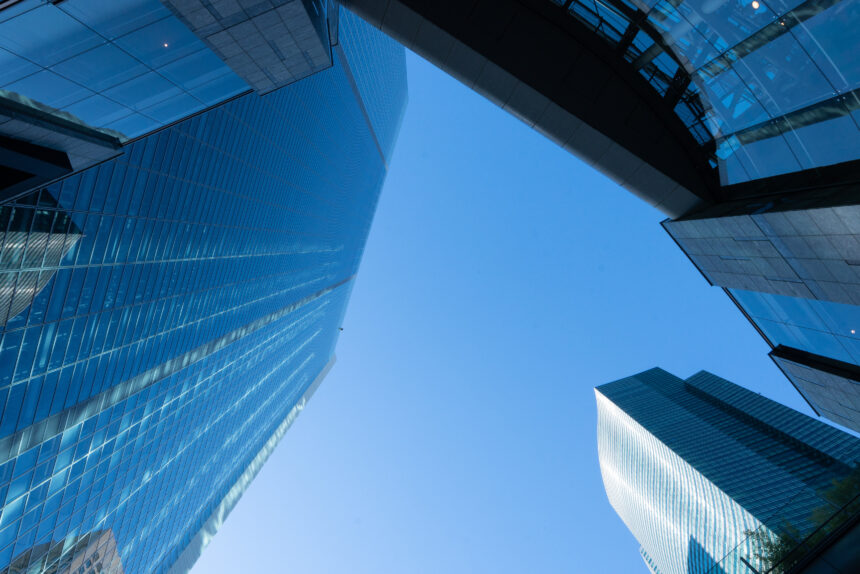 To use cross-border EC, you need to build your own site or open a store in a mall. Various companies operate their own websites or malls, and choosing the right company is an important factor for success in cross-border EC.

In this issue, we will introduce the structure of cross-border EC and a selection of major companies operating EC sites for those who are thinking about using cross-border EC in the future.

Which should I choose for my e-commerce site, in-house production type or mall type? 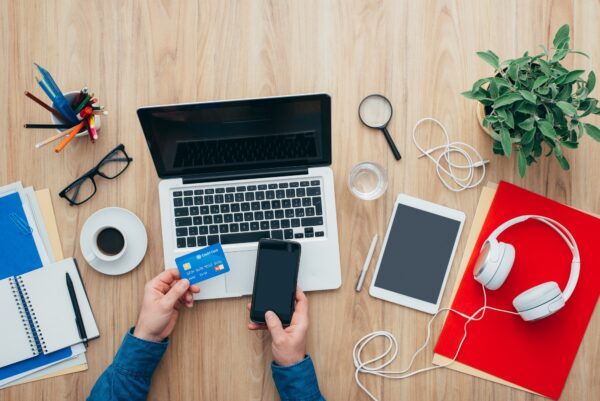 In-house production e-commerce sites are literally a way of building a site from scratch yourself.

Since you rent a server and build everything yourself, from the site’s language settings to payment methods and after-sales service chat, you can create an e-commerce site just the way you like it, although it will take more time and effort.

It may be easier to understand if you imagine it as an Internet version of a shopping mall where individual brand stores are clustered together.

Since it is possible to open a store as long as the application is approved, it saves the time and effort of creating a store from scratch in-house, and if you can open a store in a popular e-commerce mall, you can expect to attract a great number of customers.

Three of the biggest companies with their own e-commerce sites! 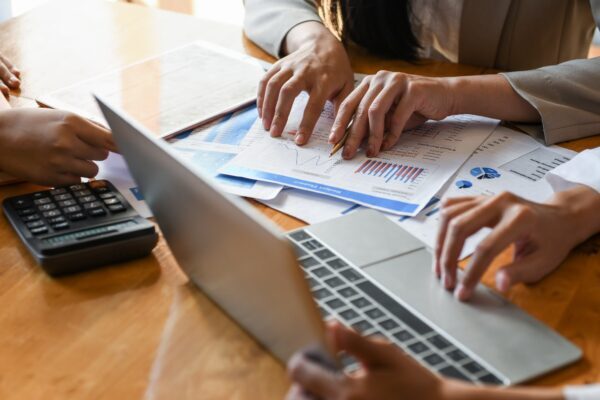 Next, we will introduce some of the major companies that operate their own production-based e-commerce sites.

Even with in-house production, each company you use will have a different website and different payment methods, so choosing the right company is a very important item.

The first major company to be introduced as an e-commerce site company is Shopify, which is based in Canada.

Shopify makes it very easy to create an e-commerce site of your choice.

Shopify is unique in that it supports multiple languages and currencies.

When using cross-border EC, it is necessary to make payments in the language and currency of the target country, rather than in Japanese, as a matter of course.

With Shopify, it doesn’t matter which country you target, as it supports 50 languages and over 130 national currencies.

In addition, Shopify is easy to use with a wide variety of design options, so if you are thinking about creating your own e-commerce site, we encourage you to try Shopify. 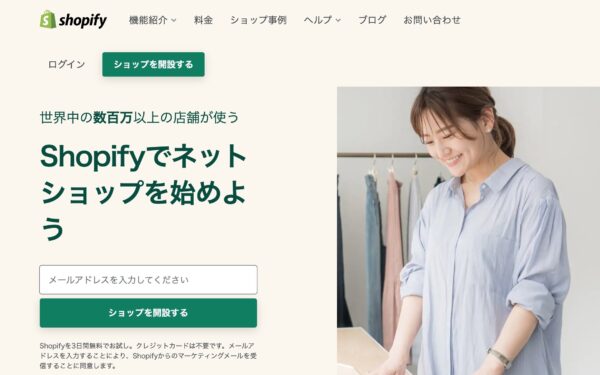 The next company we will introduce as a major player in self-produced e-commerce sites is Live Commerce.

Although the company is not well known in Japan, it has steadily increased sales in China and the U.S. and has grown into a major company.

In addition to the work of creating an EC site from scratch, you can also receive support for overseas business markets, so beginners who are “using cross-border EC for the first time” or “want to start cross-border EC by creating their own site but don’t know where to start” can also rest assured.

It is not as easy to use as Shopify, but it supports multiple languages and currencies.

If you have concerns about using cross-border EC, please try Live Commerce. 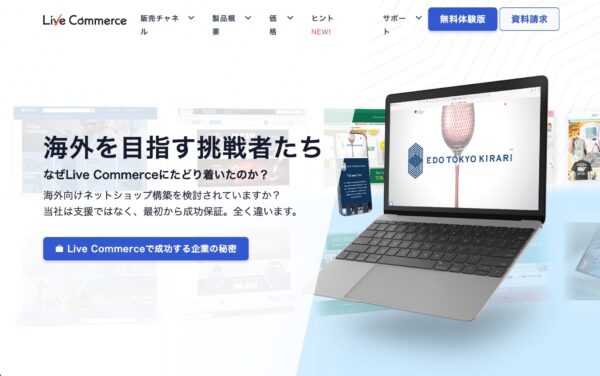 The last major company to be introduced as a leading company for self-produced e-commerce sites is Multilingual Cart.

Multilingual Cart is one of the leading in-house production e-commerce site companies, boasting the industry’s largest class in all aspects of cross-border e-commerce.

Because we boast one of the industry’s best track records in every aspect, including “languages,” “payment types,” “overseas shipping methods,” and “overseas sales results,” we have earned the trust of many cross-border EC users.

A 7-day free trial package is also available for those who are interested. 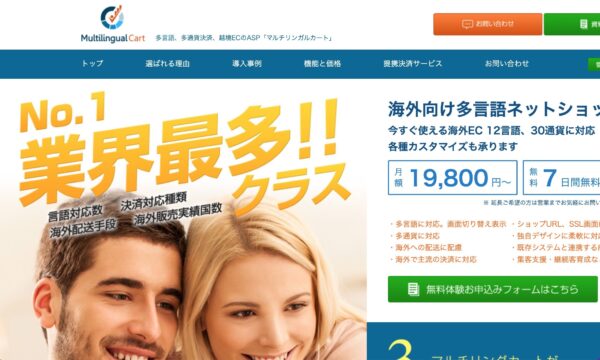 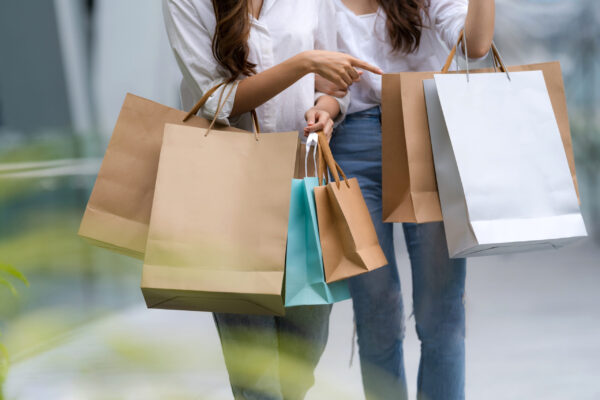 Next, we will introduce you to some of the leading mall-based e-commerce companies.

When using a mall e-commerce site, the choice of the company to open a store is a very important item because sales can vary greatly depending on the company you choose.

In this issue, we have selected major companies with strong cross-border e-commerce capabilities from China and the U.S., which are currently the focus of particular attention among mall-type e-commerce sites.

The first major mall-based e-commerce company to be introduced is China-based Tianneko.

The company has become so large that its market size is unmatched by any other company, which cannot be overlooked when discussing cross-border EC.

In China, which has the largest cross-border EC market in the world, we are a genuine major player with the No. 1 market share in the country.

With a market share of over 50% in China, Tencat has more than 65 million members, a significant lead over the second-place finisher.

One of the disadvantages of opening a store on Tianyao is that the standards are stricter than those of other companies, but this is also an advantage from the consumer’s perspective: “If you shop at Tianyao, you do not have to worry about buying fake goods.

If you are interested in selling high-quality Japanese products in China, Tianyao is definitely a company you should check out.

The next major mall-based e-commerce site company to be introduced is China-based Jingdong Shancheng.

Although it does not have the same market share as Tianneco, it is no exaggeration to say that Jingdong is one of the world’s largest companies in terms of market share.

KYODO SHOCHENG has a partnership with the Yamato Group of Japan, which allows for delivery in as little as four days from order to delivery, a very welcome feature from the consumer’s point of view.

This feature is probably another reason for the popularity of Jingdong Shopping Mall, as it is not the norm in China for ordered goods to be delivered on schedule.

In addition to daily necessities, Jingdong Shopping Mall focuses on home appliances, so if you are interested in selling home appliances and other products in China, this is a good place to start.

The last major company to be introduced as a major mall-based e-commerce site is Amazon, based in the United States, which is arguably the world’s No. 1 company in terms of name recognition.

In terms of the scale of the cross-border EC market, the U.S. is the second largest market per country after China, and Amazon is the most popular EC mall in the U.S.

There are several other well-known major companies in the U.S., such as Walmart, eBay, and Apple, but Amazon is so popular that “one out of every two Americans is an Amazon member.

As you may know if you have used the Japanese version of Amazon at least once, Amazon offers products in almost every genre, and it is possible to find anything if you look for it.

If you are thinking about starting cross-border EC in the U.S., please check out Amazon. 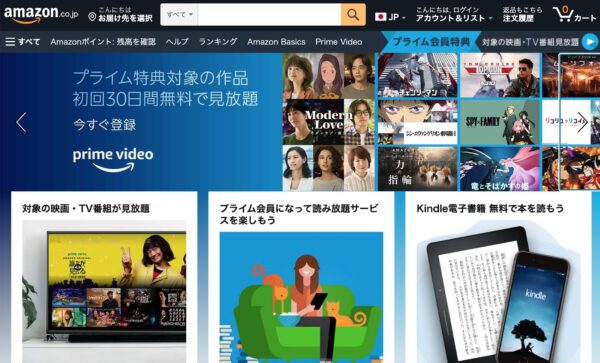 We have carefully selected the structure of cross-border EC and the major companies that operate EC sites.

By using a large company, they should be able to support users in many ways, including high customer attraction, easy accessibility, and a variety of options.

Camp x NFT] Third sale of “TAKIBI” which sold out the second sale instantly will be held! The third sale is “TAKIBI Sierra Cup# (local cuisine)